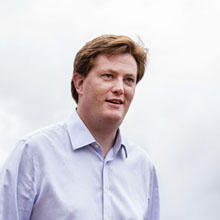 When the 2010 UK general election produced a Conservative/Lib Dem Coalition, Danny was part of the Liberal Democrat negotiating team who drew up the plans for the Coalition. He later became Chief Secretary to the Treasury until 2015. Since leaving office, Danny speaks on politics, current affairs and leadership. In February 2016 he was appointed vice president of Asian Infrastructure Investment Bank in Beijing.

Born in 1972, and raised in the Highlands and Islands of Scotland - first Colonsay, then Glengarry - Danny Alexander moved to England to study Politics, Philosophy and Economics at Oxford University.

Danny’s first job was as a press officer for the Scottish Liberal Democrats, which gave him a taste for politics and a passion for the party that never diminished.

He then spent four years at the European Movement and then a further four years as Director of Communications for the Britain in Europe campaign.

In 2003 he was appointed the Head of Communications for the newly formed Cairngorms National Park Authority before being elected as MP for the newly created seat of Inverness, Nairn, and Badenoch & Strathspey in the 2005 election.

With the 2010 UK general election produced a Conservative/Lib Dem Coalition, Danny was part of the four-man Liberal Democrat negotiating team who drew up the plans for the Coalition.

Danny was initially appointed to the cabinet as the Secretary of State for Scotland making him one of five Liberal Democrats to serve in the first Cameron ministry. In 2008 he became Chief of Staff to the Leader of the Liberal Democrats, Nick Clegg.

As part of his role Danny was given responsibility to implement the recommendations of the Calman Commission which was to give more fiscal powers to the Scottish Parliament.

At the end of May 2010, he was promoted to Chief Secretary of the Treasury.

Danny now serves as vice-president at the Asian Infrastructure Investment Bank in Bejing.

For further information or to book Danny Alexander, please contact us on +44 (0)20 7607 7070 or email info@speakerscorner.co.uk