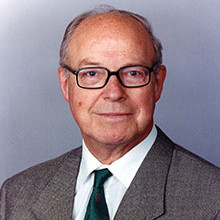 Chairman of the International Commission on Weapons of Mass Destruction, Dr. Hans Blix rose to fame as the individual who stood between the U.S. and its allies pushing for military action in Iraq and key opponents on the U.N. Security Council, trying to fairly and impartially determine the true scope of Iraq's weapons program. Hans is ideally suited to keynote speeches at any conference where world affairs is discussed.

A: £15K & Over
"Just magnificent! It was really a pleasure to work with Hans - he is easy going and great to be around. He really holds a large knowledge on the topic he presents and he manages to present his dedication to the work he is doing and has been doing. It was really inspirational to listen to him and to be able to talk with him."
International Student Energy Summit
Human Rights & Philanthropy, International Affairs, Politics & Current Affairs, Security & Risk Keynote Speakers

Hans Blix role as Chairman of the International Commission on Weapons of Mass Destruction means he is ideally suited to Keynote speeches at any conference where world affairs is discussed.

As the world urged Saddam Hussein to disarm, Chief UN Weapons Inspector Hans Blix and his team— through on-site inspections — tried to determine if the Iraqi leader was complying. While the U.S. and its allies pushed for justification for military action in Iraq, and key opponents on the U.N. Security Council called for further inspections, Dr. Blix stood between the two, trying to fairly and impartially determine the true scope of Iraq's weapons program. He brought his famous qualities of calm to bear when confronting Baghdad and conveying the message that it must do something to demonstrate it was telling the truth about its weapons programs or face war.

He served as Director General of the International Atomic Energy Agency from 1981 to 1997.   In 2000, the UN Secretary General Kofi Annan appointed Hans Blix head of the United Nations Monitoring, Verification and Inspection Commission (UNMOVIC). He retired in June 2003. Dr. Blix is Chairman of the newly formed International Commission on Weapons of Mass Destruction, which began work in 2004.

He has an Honorary Doctorate from Moscow State University (1987) and is a recipient of the Henry de Wolf Smyth Award (Washington DC, 1988). In 1997, he was awarded the Gold Medal for distinguished service in the field of nuclear affairs by the Uranium Institute, the predecessor to the World Nuclear Association. In 2001 he became Honorary Chairman of the WNA.

He has written several books on subjects associated with international and constitutional law and of course, Iraq.

What people said about Hans Blix