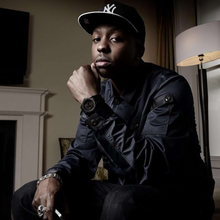 Internet entrepreneur, Jamal Edwards MBE is a self-made media mogul who developed the online platform SB.TV to showcase "street-shot" freestyle raps and music videos. Such is the success of SB.TV, Jamal has received numerous entrepreneurial awards as well as receiving an MBE in 2014. Counting politicians and members of the Royal Family as friends, Jamal's an incredible story of entrepreneurial spirit with some exceptional networking skills.

C: £5K - £10K
"He was insightful and opened up a window to a world we have become so fascinated with. We look forward to working with him again."
TEDx Hollywood
Social Media, Technology, Arts & Culture, Business, Innovation, Entrepreneurs, Marketing & Branding Keynote Speakers

Internet entrepreneur  and self-made media mogul Jamal Edwards MBE is a business sensation, and an innovative and exciting speaker.

Jamal founded SB.TV at the age of 15, with little idea or vision of what the future held. His raw and unique venture relied on friends rapping to camera, and soon began to attract increasingly major names in the world of urban music, eventually becoming a lauded music and lifestyle media platform with global reach, which launched the career of international superstar Ed Sheeran.

His UK online urban music channel has grown fast and strong, and now has over 180 million YouTube subscribers and has featured interviews with an impressive and uniquely high-level catalogue of guests, including politicians David Cameron and Ed Milliband, as well as major international artists such as Nicki Minaj and Jessie J.

In 2011 Jamal became the face of the Google Chrome ad which was the second most popular YouTube ad that year. "The web is what you make of it" series of ads received more than 750,000 views in six days.

Named one of Richard Branson’s ‘Young Pioneers’ in 2012, Jamal has been described as ‘The Branson of the Urban Scene’, making the self-professed ‘normal 22-year-old’ anything but…

Also in 2012 Jamal was named on the Sunday Times Rich List and has been expounding his business wisdom and inspirational advice at a TEDx Talk hosted at the houses of parliament.

In 2013 Jamal published his groundbreaking business book Self Belief: The Vision – the book became a number one bestseller in its first week of publication.

Jamal is a patron for The Prince’s Trust and Access to Music and is committed to using his success to inspire young entrepreneurs and all young people.