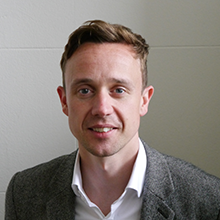 Described as ‘the best historian of his generation’, John Bew is an author, a TV and radio broadcaster, and a Professor in History and Foreign Policy at the War Studies Department at King’s College London. He has presented several BBC TV and radio documentaries and has spoken at venues around the world, including the British and European Parliament and the National Defence University and Library of Congress.

Professor in History and Foreign Policy at the War Studies Department at King’s College London, John Bew is an experienced author, keynote speaker and TV and radio broadcaster.

The former Justice Secretary, Michael Gove, has described him as ‘the best historian of his generation’.

John has spoken at venues around the world, including the British and European Parliament, the National Defence University and Library of Congress, and the Locarno Room of the British Foreign Office. He is available for non-academic speaking events, public lectures and book fairs.

He has also written and presented several television and radio documentaries for the BBC; was formerly a panellist on BBC’s Newsnight Review; and has made regular appearances in the media for outlets such as CNN, BBC News, Sky News, Reuters, Monocle, Voice of America, and France 24.

John is currently leading a project with the think tank Policy Exchange to bring more academic expertise to the foreign policy debate in Westminster, working with politicians from across the political spectrum. Moreover, he runs a summer school in conjunction with the Clements Center for History, Strategy and Statecraft at the University of Texas for the next generation of foreign policy leaders.

Previously, he ran a series of seminars at the Foreign Office, working with the Knowledge and Information Department, at which academic experts addressed Foreign Office staff on their areas of expertise.

In 2015, John was awarded the Philip Leverhulme Prize for Politics and International Studies, which ‘recognises the achievement of outstanding researchers whose work has already attracted international recognition and whose future career is exceptionally promising’.

From 2013 to 2014, he was the youngest ever holder of the Henry A. Kissinger Chair in Foreign Policy at the John W. Kluge Center at the US Library of Congress. From 2014 to 2015, he held a Leverhulme Foundation Scholarship in order to complete his history of the concept of realpolitik.

He was formerly co-Director of International Centre for the Study of Radicalisation and Political Violence, having arrived at King’s in 2010.  From 2007 to 10, John was Lecturer in Modern British History, Harris Fellow and Director of Studies at Peterhouse, Cambridge University, where he was previously a Junior Research Fellow.

In 2009, John was profiled by the Observer as one of the rising stars of the historical profession and in 2011 the Daily Telegraph named him “one of the most exciting young historians in Britain”.

John’s first book, ‘The Glory of Being Britons: Civic Unionism in Nineteenth-Century Belfast’, was chosen as the inaugural book in a new series initiated by the Royal Irish Academy.

‘Citizen Clem: A Biography of Attlee’, has been described as “easily the best single-volume, cradle-to-grave life of Clement Attlee yet written”; while ‘Talking to Terrorists: Making Peace in Northern Ireland and the Basque Country’ was chosen in Foreign Policy Magazine’s Global Thinkers Book Club in December 2009.

His book on Lord Castlereagh was launched by William Hague, the former Foreign Secretary, and praised by Jack Straw, one of Hague’s predecessors, as “excellent”. Entitled ‘Castlereagh: Enlightenment, War and Tyranny’, it was published in 2011 and named one of the books of the year by the Wall Street Journal, Sunday Telegraph, BBC, and Total Politics magazine. It was also chosen by the Fondation Napoléon as ‘book of the month’ for March 2012; was recommended in the Foreign Office Christmas Reading list; and was featured in BBC Parliament’s Christmas edition of Booktalk.

‘Realpolitik: A History’ was published in January 2016, and was reviewed widely in the international media including the Financial Times, Prospect, New Statesman, National Interest and Wall Street Journal, as well as the top peer-reviewed journals in the field.