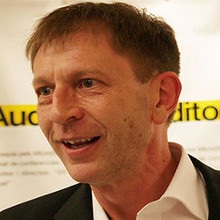 Kane Kramer is a serial inventor. His inventions include the technology behind the MP3 player and Monical. Inventor and businessman, Kane is a technical innovator and expert in visionary ideas. The coupling of his business knowledge and revolutionary designs make him a fascinating keynote speaker.

Kane Kramer is a serial inventor. His inventions include the technology behind the MP3 player and Monical. He is a fascinating keynote speaker.

Kane first conceived the idea of downloading music, data and video down telephone lines in 1979 when he was 23, and patented it with James Campbell who was 21. Together they went on to pioneer digital recording and built the worlds first solid state digital recorder/players. Kane was recognised by Apple in 2007 for his inventorship and since has acted as expert consultant.

Kane’s latest invention is Monicall - a system for making conversations into enforceable and legally binding agreements. Kane is a member of the ICE inner circle (International Clean Energy) and recently followed Al Gore as speaker on the importance of harnessing innovation in the fight against global warming. Kane is also the founder of the British Inventors Society BIS, British Invention Show and British Invention of the year Awards.