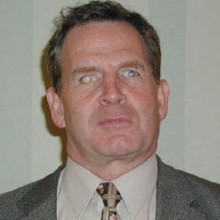 Blinded by a firework at the age of ten, Mike has not let that stop him. He has enjoyed incredible sporting success and was honoured with a CBE for services to disabled sport. Mike has overcome unimaginable adversity in his career and is uniquely placed to inspire an audience with his astonishing tale. Profoundly inspirational,  down to earth and humorous, he is a motivational speaker of the highest calibre.

E: < £3K
"Mike had a relaxed and humorous style that engaged the audience. We were pleased he arrived early enough to chat to us before speaking."
Carr-Gomm Scotland
Sport, Teamwork, Adversity Motivational Speakers, Keynote Speakers

Blinded by a firework at a young age, Mike Brace has enjoyed unimaginable sporting success; his experience has made him a  motivational speaker  of the highest calibre.

Born in Hackney, Mike had a fairly standard upbringing, bar his particular passion for sport. Until, at the age of ten, he was blinded by a firework which had been concealed in a bottle and exploded in Mike’s face.

Confronted by adversity, sport was Mike’s crutch and helped him with the challenges of adjustment and rehabilitation. Several decades later, his love of sport has endured.

National Champion at race-walking for many years, Mike holds many records. He plays cricket for his club Metro who have been National Club, League and Cup Champions many times.

His main sporting achievements include completing two London Marathons, two ski marathons in Norway and Switzerland, and, definitely the most tiring, the Devises to Westminster Canoe Marathon -over 125 miles!

As Mike’s racing days came to a close, he became involved in various skiing management tasks. He managed the Cross-Country Ski Team from 1988 until 1994, and was then appointed Chef de Mission for the Great Britain Team for the 1998 Winter Paralympics in Japan. He attended the Paralympics in Salt Lake City in 2002 and Athens in 2004, as Head of Delegation. Mike has also managed athletics teams in European and World Championships, and was the Manager for the first England Blind Cricket Team which participated in the inaugural World Cup of blind cricket in India.

As well as founding the Metro Sports Club for the Blind, Mike was involved in the setting up of a number of national sports bodies for the disabled including: British Blind Sport, British Ski Club for the Disabled, and the British Paralympic Association. He has also served on a number of working parties such as Sport England’s Strategy Group.

Alongside Mike’s sporting career and his serving in a voluntary capacity on many Committees, he has enjoyed a successful career in social work.

Having qualified as a Social Worker from London Metropolitan University in 1976, he worked as a social worker, Manager, Service Manager and then Assistant Head of Service in four London Boroughs. He left social work in 2001 to establish a new charity “VISION 2020 UK”, which encourages all the numerous voluntary bodies and statutory services involved with visual impairment to work more closely together. After serving as Chief Executive of VISION 2020 UK, he retired from this post in 2012.

Governor of University of East London for nine years, Mike also served on the working party that established, and then the main board of, the UK Anti-doping Agency (UKAD).

His is passionate about the role new technology can play in the lives of people who are vision impaired and he pursues this interest in his role as non-Executive Chairman of an IT company called Nemesis.  He has written an autobiographical book, published in 2017 which aims to challenge attitudes to disability and also covers Mike’s prolific career in sport and social work.

Able to speak about overcoming adversity, changing attitudes to disability, sport and technology, Mike is the ideal speaker for a plethora of live events.

What people said about Mike Brace