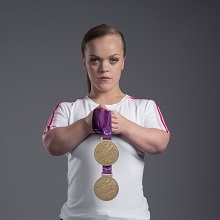 The youngest recipient of an MBE, Ellie Simmonds OBE is an inspirational five-time Paralympic swimming champion. Since her meteoric rise into the public eye, she has dominated her sport, winning 13 World titles and 10 European titles, while breaking various World records along the way.

Eleanor ‘Ellie’ Simmonds OBE is a five-time Paralympic Champion and fourteen-time World Champion. Ellie shot to fame when she won her first Paralympic medals at just 13 years old at the Beijing Paralympic Games, a year after becoming the youngest person ever to represent a senior GB swimming team at a World Championships as a 12-year-old.

Ellie’s disability is classified as Achondroplasia dwarfism. She started swimming at the age of 5 and started competing against able bodied children at the age of 8. At 10 years old Ellie’s talent was spotted at a disability event and she was entered onto the British Swimming talent program and worked her way through to be selected as the youngest member of a senior British swimming squad for the 2006 IPC World Championships at 12 years and 3 weeks.

Ellie went on to become the youngest winner of the BBC Young Sports Personality of the Year in 2008 and then the youngest recipient of an MBE at the age of 14.

Since her meteoric rise into the public eye, Ellie has continued to dominate her sport, winning 14 World titles, 10 European titles and breaking numerous World records along the way.

After her S6 100m and 400m gold medals at Beijing ’08, Ellie went even better at the London 2012 Paralympics, winning four medals, including two Golds, and broke a further two World records, all amidst the backdrop of being the poster girl of the Games.

This success in London helped make her the most recognised Paralympic athlete in Great Britain, if not the world. Rio 2016 saw Ellie once again top the podium, winning yet another Gold and in doing so setting a new world record for the SM6 200m Individual Medley, becoming the first S6 ever to swim a sub three minute time.

Ellie has captured both the hearts and minds of the British public, initially balancing her stardom with her school work and her round-the-clock training.

Since leaving full-time education, Ellie’s work outside of the pool with charities such as Dwarf Sports Association, WaterAid and I AM WATER, in addition to her frequent work in the media, has truly cemented her status as Britain’s golden girl.