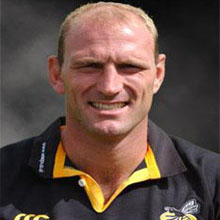 English rugby union player and former captain Lawrence Dallaglio is a rugby legend. Since retiring from rugby Lawrence has taken on a few commerical ventures, teamed up with BT Sport to become their leading rugby union expert on the Sports Channel and set up the Dallaglio Foundation, which aims to help the disadvantaged.  Lawrence combines his confidence and expert knowledge to deliver motivational speeches.

Former England RU Captain Lawrence Dallaglio returned from Australia in December 2003 as part of the victorious England World Cup team and was recalled to play for England in 2006.  He is one of a number of outstanding rugby motivational speakers available for corporate events.

Lawrence Dallaglio was signed by Wasps in 1990 after catching their eye as a promising England Colts player. He became Wasps captain in the 1995 when he was also voted the Rugby Football Unions’s Player of the Year.

Lawrence was a member of the triumphant England 7’s team which won the Rugby World Cup at Murrayfield in 1993 and has also played for his country at every representative level – Colts, Under 21, Student, ‘A’ team and 1st XV.

Regarded as one of the world’s greatest ever back row forwards, Lawrence was the only player to play in every minute of every match during England’s successful campaign in Australia when they were crowned World Champions in 2003. This achievement made Lawrence the only northern hemisphere player to hold a World Cup winners medal in both the 7s and 15 game.

Lawrence Dallaglio's achievements with Wasps are also exceptional having won a hat-trick of Premiership titles from 2002 to 2005, a Tetley’s Cup win in 2000 and two famous European Cup victories in 2004 and 2007. His 18 year career with the club came to a fairy tale end in May 2008 when Wasps claimed the Premiership title beating Leicester Tigers in his last ever professional game of Rugby.

Lawrence was recently awarded an OBE in the Queen’s Birthday honours list, and as well as being a Wasps, England and British & Irish Lions hero, is an icon and figurehead of world rugby.

Since retiring from rugby Lawrence has taken on a few commercial ventures, as well as teaming up with BT Sport to become their leading rugby union expert on the Sports Channel.

In 2009 the Dallaglio Foundation was set up and exists to nurture and develop the essential skills of disadvantaged young people.  By increasing their sense of worth, self-confidence and self-esteem we work to empower them to make better life choices, now and in the future. Lawrence is the figurehead and leader of this scheme.

Lawrence Dallaglio is available as a fantastic motivational speaker at any corporate event.