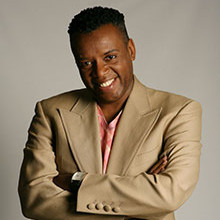 David Grant uses music to bring a fresh approach to leadership and team building, including 'attitudes to change', the innovation needed to 'stay ahead of the game', & the passion required from the top downwards to lead others. As a keynote speaker on the corporate circuit, he reminds audiences from a results-orientated business environment that people are “human beings” and not “human doings".

David Grant is probably most widely known through the series of “Fame Academy” and “Pop Idol”, in his roles as vocal coach and/or judge.  Along with his wife Carrie, they are now seen as the most successful vocal coaches in the UK.  David and Carrie's experiences of encouraging people to maximize their skills mean they are ideally suited for presenting awards and giving motivational speeches.

Interactively using the medium of music David & Carrie Grant have trained clients such as The Foreign Office, Express Newspapers, Body Shop, The NHS, Lloyds Bank, Barings Asset Management, Shell, and many others.

David and Carrie have got heavily involved in the Business Management Training field. They use music to communicate leadership principles. Their work began at The Ashridge Management Training College where they still teach regularly. This work broadened to many outside clients throughout the UK and abroad. They principally work with clients who are studying strategy, change management and team building. The sessions are great fun but also have very powerful leadership messages. They provide a number of different options to fit into a variety of programmes.

Additionally, David and Carrie present tailor-made evenings for all types of events from small parties to large corporate gatherings.

With their singing, coaching and presenting skills they regularly take part in a variety of different events. In the past year they have judged National singing competitions including Yates Wine Bar National Kareoke Competition, Chorister of the Year and School Choir of the Year. Equally they have judged singing for private parties. They have coached groups of over 200 people to sing and put on a performance in an hour! They have hosted events, award ceremonies and made after-dinner speeches. They have also done any combination of the above plus singing themselves.

The story started in the early eighties with Linx. Primarily a partnership between vocalist David and bassist Sketch. Between 1980 and 1983 the band  had four top twenty singles, which earned them a nomination as Best Newcomer in the Brit awards The band split in 1983 and David re-emerged as a solo artist with a string of hit singles. In all David had some 14 hit singles in the UK charts. Throughout this period David also found time to present tv shows such as well as being virtually a resident on Mike Read’s “Pop Quiz” and presenting various soul shows, including the Robbie Vincent Show on BBC Radio London.

In the mid 90’s David and his partner Carrie made their highly acclaimed album “Watching and Waiting” which went on to win them a prestigious MOBO Award. David also found time to develop an acting career, performing at the National Theatre and the Bristol Old Vic as well as for Channel 4 films.

Having performed as a vocalist, and also recorded on countless sessions as a session vocalist, David has put his very considerable experience into practice as a vocal coach, and has worked with a number of UK top artists including Will Young, Take That and The Spice Girls.

David is in the invaluable position of having seen the music industry from the “inside”. Along with his wife Carrie, they are the foremost vocal coaches in the UK, they have a passion for singing, that is second to none, and they are seeking to help improve the talents of as many vocalists as possible.

Beyond his tv appearances as a vocal coach/judge, David is often featured as a “pop” pundit on various music programmes. He has recently been a guest on “Celebrity Mastermind”(specialist subject The Works of Stevie Wonder) and extending his role into current affairs and politics, appearing regularly on “The Wright Stuff”, “The Daily Politics” and also on “Newsnight”. Both David, and Carrie, are very supportive of young talent, in the arts generally, and they presented awards at the Teaching Awards. David has recently taken on the role of ambassador for UK Skills, supporting young people in developing their talents in a wide range of skills, where he delivers a number of motivational speeches.

What people said about David Grant