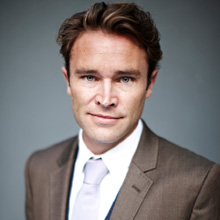 DP has presented some of MTV’s most popular shows, including TRL, Screenplay, MTV News and Overdrive. A versatile presenter and co-founder of MooVoo an online editing platform for short mobile movies, DP is talented and intelligent. Full of Irish quirks and charm, DP is prolific and versatile.

E: < £3K
"He was a friendly, energetic and professional announcer. Despite us throwing him in at the deep end he picked up the event very well. DP was a pleasure to work with and all the team got on fabulously with him. A genuinely really nice person as well as an ultimate professional!"
The Royal Society for the Prevention of Accidents (ROSPA)
TV Presenters Conference Facilitators, Awards Hosts & Presenter

David Paul Fitzgerald, known as ‘DP’, is a charming, experienced and talented television presenter and awards host with a gentle manner and a compelling Dublin accent.

DP has presented some of MTV’s most popular shows, including TRL, Screenplay, MTV News and Overdrive.

Always up for an adventure, his job took him through the States in a convertible, presenting a travelogue for Yahoo.com.

Prolific and versatile, DP has presented Showbiz Darts and Roller Jam on Challenge, both transmitted in the UK and the States. He has also worked extensively for Sky and was the director and producer for the Movember campaigns from 2011- 2013.

DP’s skills extend to live stage shows, where he uses his music knowledge to host stages and interview bands at The Oxygen Festival, Meteor Irish Music Awards and V Festival.

Intelligent and quick-witted, DP graduated from Trinity College in Dublin with a masters in Business, Economics and Social Studies.

Before presenting work, DP founded and headed the European Youth Parliament for Ireland where he represented Ireland parliamentary sessions across Europe. He has also worked as a freelance journalist since 2010, publishing articles, script writing and copyediting.

Skilled not only as a presenter, he is the co-founder of mooVoo, an online editing platform for short mobile movies.

A prolific and versatile TV presenter and awards host, DP Fitzgerald is able to both host and facilitate live events to great success.

What people said about DP Fitzgerald