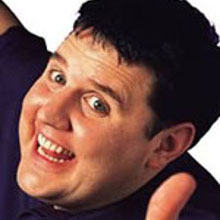 Comic genius and nation's favourite Peter Kay is a star of the comedy circuit. Having unparalleled success in his sell out gigs, singles and books, he has truly cemented his place as a star of the entertainment world. An adept awards host and after dinner entertainer, Peter is a sure fire hit in any event he takes on. Jolly and absolutely engaging, his recognisable style will have audiences in stitches.

Peter Kay, a fantastic awards host and comedian was born, bred and still lives in his beloved Bolton. He left school with one GCSE in art and proceeded to drift from one dead end job to another, earning a living as a cinema usher, a steward at Manchester Arena, and even a mobile disc jockey.

When Kay eventually tried his hand at stand up he found his 'wilderness years' had furnished him with an almost endless supply of characters and situations to draw on for material.

Within a year of launching himself onto the stand up circuit, Kay won the 1997 Channel 4 'So You Think You're Funny?' competition. From there his rise to the top was rapid. Along the way there were Perrier nominations, the Big Breakfast, The Peter Kay Thing, sell out tours, British Comedy Awards and Phoenix Nights.

Peter had a number 1 hit single and has written a best selling book 'The Sound of Laughter' , followed by the highly acclaimed Saturday Night Peter (released in 2009). He was one of Michael Parkinson's favourite guests of all time and appeared on The Last Parkinson.

Peter has gone on to develop Britain's Got The Pop Factor on Channel 4, and Geraldine - The Winners Story. He has released numerous DVDs and audio CDs, and was chosen to front the John Smiths Bitter 2010 campaign. Peter was also the awards host at the 2010 Brit Awards and due to an incredible level of demand, expanded his 2010 tour.