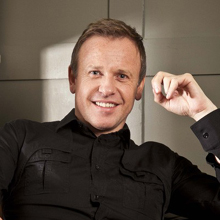 Tim Lovejoy is an ideal presenter and awards host. As the man behind the football show Soccer AM, he is an accomplished presenter and producer and is ideally suited to host any awards ceremony or event. He left Soccer AM to broaden his horizons and has already presented ''Something for the Weekend'' for a number of years, followed by the ever popular Sunday Brunch.

A man of many talents, Tim famously got the word “bouncebackability” introduced into the Oxford English Dictionary; he’s also beaten Gazza at tabletennis and has been threatened by superstar rapper Eminem!

With Soccer AM co-host Helen Chamberlain, Tim conducted three hours of football-related lunacy that attracted a cult following, a diverse list of high profile guests and a permanent place in modern football culture. So much so that Christmas 2004 saw Universal Video release a Best Of Soccer Am DVD which went straight into the DVD charts at No. 1 in the Sports field. This success was repeated in Christmas 2005 with the Best of Soccer AM II.

Soccer AM sees the worlds of showbiz and football overlap with hilarious consequences on the famous orange sofa where celebrities reveal their football allegiances and players reveal their suspect middle names. Stan Collymore, Robbie Fowler and Paul Gascoigne, have sat alongside Nicholas Parsons, Noel Gallagher and Chris Evans!

Tim was thrilled to have been invited to join Vicki Butler-Henderson as the co-host on Channel 5's flagship show Fifth Gear. The series saw Tim driving some fantastic motors and interviewing Al Gore and Lily Allen about their love of cars. Although Tim admits he doesn’t know how engines work, he makes up for it with enthusiasm and a love for cars. He currently drives an Audi A8, but fondly remembers the thrill of a recent blast in a Lotus Elise!

Tim presented a live show on BBC called Something For The Weekend which started in October 2006. The show was a big departure for Tim as it featured  a whole new world for him - cooking!

Now an established presenter of Sunday Brunch on Channel 4.

After he worked in music as a merchandise manager for touring bands Tim began his television career as a covering VJ for the MTV channel before joining Planet 24 where he worked as a researcher and then producer for The Big Breakfast. Until now Tim has been Soccer AM presenter and producer - a unique role at Sky Sports.

Tim joined Sky Sports at the beginning of the 1996-97 season. In the early years he spent time combining his busy television schedule with his award winning music show on London's XFM radio. Since the birth of his twin daughters he gave up radio and spent more time on television. Although he hopes to revive his radio career some day!

In 2004 Tim presented his own ten part entertainment / chat show on Sky One. Entitled Tim Lovejoy and The Allstars it was a live one-hour show featuring the best in music and entertainment. Guests included Tracey Emin, Simon Le Bon, Noel Gallagher, Martin Kemp, Johnny Vegas and bands such as Placebo, Travis, Goldie Lookin' Chain, Baby Shambles, The Cure and The Happy Mondays.

Tim was a guest panelist on The Wright Stuff in 2008, and in the same year launched an internet channel, Channel Bee. In 2009 Tim appeared on Britain's Got More Talent and BBC One's This Week. Tim also appeared as co-presenter alongside Colin Murray for Murray and Lovejoy's Sport Express on Radio 5 Live. In 2010 he was successfully chosen to join the Blue Peter team as a guest presenter.

Besides all the television presenting and producing, Tim has also written a weekly column for Nuts Magazine, and contributed to GQ.

Tim Lovejoy, ex host of Soccer AM is the ideal host for award ceremonies and events.